By YOGESH BRAR
February 12, 2018
0
4
Facebook
Twitter
Google+
Pinterest
WhatsApp
Xiaomi has been making waves this past week, they will be announcing their new products at an event in New Delhi on 14th February. There has been speculation that Xiaomi will announce the Redmi Note 5 at the press event. 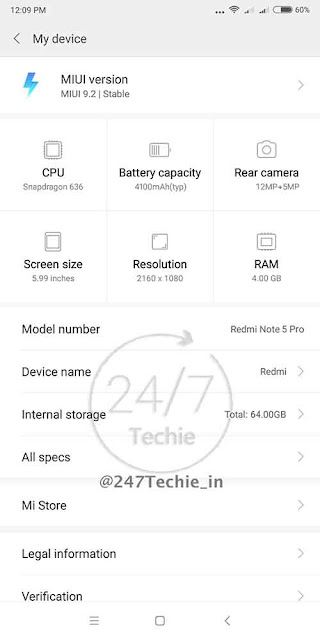 We got hold of an image which shows the device info of the Redmi Note 5 Pro. According to the image, Redmi Note 5 Pro comes with the all new Qualcomm Snapdragon 636, with two RAM variants 4/64 and 6/64 and a Hybrid slot for expandable storage.

In addition to this the smartphone will feature dual rear cameras of 12 MP and 5MP each, with a 20MP front camera. All this will be powered by a massive 4100mAh battery.