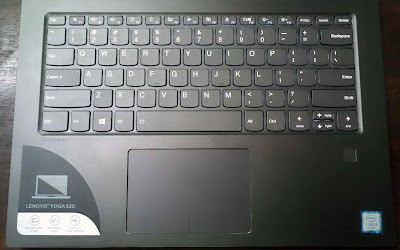 The notebook has a mixed design with the palm rest and display cover made of aluminium and the base being made of plastic.  The aluminium palm rest adds a strength and lush feel to the notebook. Thanks to the 360 hinge by pulling on both sides, the display cover can be twisted without having to use much force.
There’s no noticeable creaking sound while adjusting the hinge, other than a click sound. Unfortunately, you cannot open the display with one hand. There is slight display wobble when using the touchscreen, but considering the price it is acceptable.
Lenovo has been pushing Yoga 520 with slim bezels, and indeed they are, but only on the top and sides. There’s still a considerable amount of bezel on the bottom. At a weight of about 1.73 kg and a case thickness of 19.9 mm, the Lenovo Yoga 520 is a tad bit thick when compared to its rivals.
For the limited time we had this notebook, we didn’t see any visible signs of wear.
Connections
In this area Lenovo has taken the route of a modern day notebook. On the left side, there’s a USB 3.0 port, a HDMI slot, a USB Type C port and an audio jack. On right side, there’s a SD reader and a USB 3.0 port. The USB Type C port used here is a generation 1 port, meaning it offers neither DisplayPort nor Thunderbolt 3.

To accommodate this Lenovo got rid of the Ethernet Port.
We did feel a lack of ports, there should have another USB port or a Type C port with more functionality.

Software
The Lenovo Yoga 520 comes with the Windows 10 Home out of the box. We would recommend you to upgrade the Windows to the Pro version, which has additional functionalities and performs better over time. Windows Hello comes a part of the OS and is integrated with the fingerprint sensor placed on the corner of the palm rest.
Apart from the Windows apps, users also get a suite of Lenovo apps that help run the system. Lenovo Active Stylus, Lenovo App Explorer, Lenovo Companion, Lenovo Settings, McAfee LiveSafe, Microsoft Office trial.
Keyboard & Touchpad
Lenovo is always for the keyboards they used on the ThinkPad series and they have passed on that trait to the lower series as well. Keyboard on the Yoga 520 is a breeze to type on. The backlit keyboard (two steps backlight) offers a sufficient stroke (which is not a given anymore in today’s keyboards). 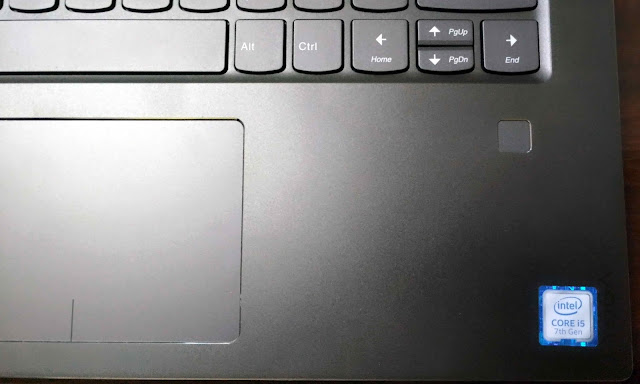 The in built touchpad is more of a clickpad with integrated keys. The size of the clickpad is adequate. Windows gestures work great and we didn’t encounter any error with it. Click works great and there’s no loud sounds. 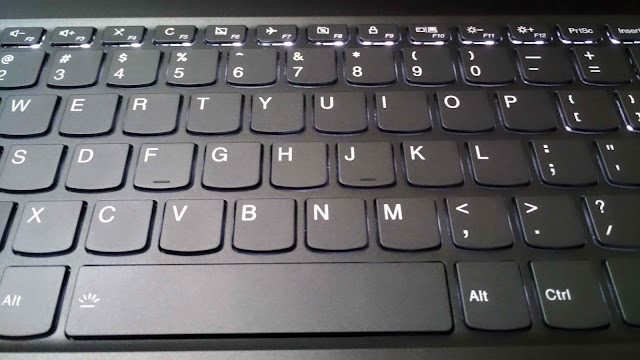 Display
The 14-inch display has an FHD resolution of 1920×1080 pixels with a density of 157 pixels per inch. The display technology used is IPS and it’s a reflective display. The display is definitely a step above the earlier generations with the trimmed bezels but we feel there’s a lot that Lenovo needs to improve. In our tests the display managed to perform well with above average colour reproduction and we didn’t notice any flickering. There have been reports about backlight bleeding in this model, but we didn’t anything like that with our review unit. 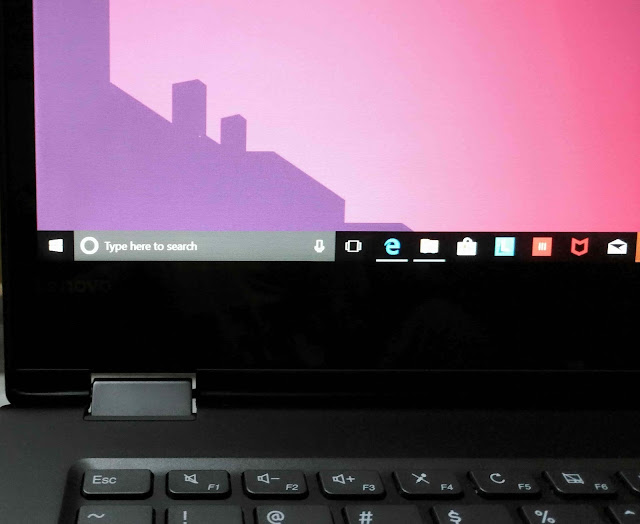 The only area where it needs work is the brightness, it might be an issue with some users. Other than this there’s nothing to complain.
The digitizer works great and people with creative work might want to get the stylus which is a Wacom certified pen and is an optional accessory with the Yoga 520 series.
Performance
Since there are no screen options, Lenovo has given choice in the other departments. Lenovo Yoga 520 is available in a wide range of processor choices along with RAM options. On the graphics front all the models are equipped with the Intel 620 HD internal graphics and there’s an option for external graphics wherein you get 2 GB Nvidia Geforce Mx 940. Processor choices range from 7thgeneration Intel i3 to 8th generation i7.
The model we tested had the 7th Generation Intel i5 processor, Core i5-7200U to be precise. Core i5-7200U happens to be the most used Kaby Lake processor in the notebooks. Our unit had 4 GB RAM, and its not soldered in and since there is one slot, there can be a maximum of 16 GB of RAM. The main memory will always operate in single-channel mode.
There are more choices in terms of the SSD and HDD: there are models with 256 and 512 GB PCIe SSDs as well as a model with a 1 TB HDD.
Coming to the heart of this notebooks, its processor. The Core i5-7200U is a dual-core processor from Intel, which was first introduced in 2016 and belongs to the Kaby Lake generation. The two cores run at a 2.5 GHz base clock speed and at 3.1 GHz in Turbo-Boost mode. Since this processor belongs to the U series, Intel has set a maximum consumption of 15 watts for the Core i5-7200U.
Since OEM’s can tweak this, Lenovo has set the consumption at variable settings.
These are 8 and 12.5 Watts which can be seen in the Cinebench Benchmark. Now this has hit the performance a little bit. In our tests Lenovo Yoga 520 scored in the range of 270-290 on the Cinebench multi-core tests.
Yoga 520 did well in the PC-Mark benchmarks and we didn’t find any major performance dips while running this.
Sound
Lenovo has given a lot of stress on this. The Yoga 520 is equipped with dual speakers that are placed at the bottom. Now the speakers are made and tuned by HARMAN and are support Dolby Audio. For the price you are paying for this notebook, the speakers are okayish. Audio can be tuned via the supplied softwares according to your taste which is a plus.
Graphics
The Yoga 520 we tested had the Intel HD Graphics 620 which is integrated into the CPU and is available in most of the U CPUs of the Kaby Lake generation. Now integrated GPU’s like the 620, are main memory dependent. This being a 4GB RAM variant notebook with a Single channel RAM makes graphics performance very sluggish.
Intel HD 620 can handle basic stuff thrown at it but lags with graphic intensive tasks. For heavy users we would suggest going with the notebook variant that has the Geforce Mx 940. This notebook is not made for gaming at all, be it the integrated graphics or external graphic variant.
We ran 3D Mark benchmark and here’s the score:
Battery
The Lenovo Yoga 520 variant we had packed a 35 Wh battery, which might be a little less for some users. Lenovo has simple carried over the battery from the Yoga 510. The battery took about 2 ½ hours to charge which is average.
Since it being a smaller battery we didn’t get much of a battery backup. The idle usage (without WLAN and low brightness) was 8 hours. With heavy usage the Yoga 520 lasted for about 3 hours.
Verdict
Overall we did like the design language that Lenovo is chosen for the Yoga 520 series. The hinge is great, the quality made aluminium case feels sturdy. There are plenty of connectivity options, but we would have liked a Type C Thunderbolt port thrown in too. Typing felt comfortably nice and quiet, and the touchpad’s superb gliding properties were accompanied by the fast and reliable fingerprint-reader.
If you are looking to dip your feet in the convertible notebooks territory definitely take a look at this one. We would recommend going with the i3 variant if you are a casual user, but if gaming and high graphics tasks are your priority then this one is not for you.