By YOGESH BRAR
November 15, 2017
0
3
Facebook
Twitter
Google+
Pinterest
WhatsApp
OnePlus is about to announce company’s new Flagship the OnePlus 5T at a special event in New York City today. Last week we brought you the exclusive Oreo ROM for the OnePlus 5 and the 5T early renders. We were just sent an image of what appears to be the backside of an Indian Retail box with the price clearly visible. The price quoted on the box is Rs 39,999. 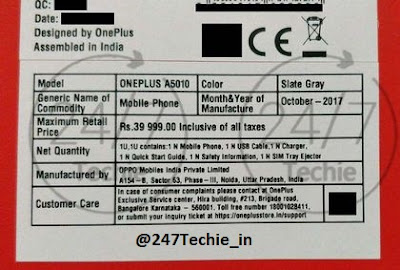 We cannot confirm the authenticity of this and will leave you guys to decide it. What we can confirm are the Specifications. As the past leaks have revealed 5T sports a 6 inch 18:9 aspect ratio display with a resolution of 2160 x 1080 and due to this aspect ratio display the fingerprint sensor has been moved at the back of the device. Design wise it’s similar to the OnePlus 5 with the same footprint. Like OnePlus 5, the 5T is also expected to be powered by the Snapdragon 835 SoC and will be available in 6/64 and 8/128GB storage variants.

Here is the OnePlus 5T’s Specifications :
OnePlus 5T will be an Amazon Exclusive in India and there is a Special Sale planned on 21st November.
Stay tuned for more updates!
Facebook
Twitter
Google+
Pinterest
WhatsApp

YOGESH BRARhttp://www.247techie.in
The guy recommending you Tech products, living on the Internet. Tips : Yogesh@247Techie.in
Previous articleOnePlus 5T : India Price Speculation and more
Next articleOnePlus 5T is coming to India at the same price as that of OnePlus 5