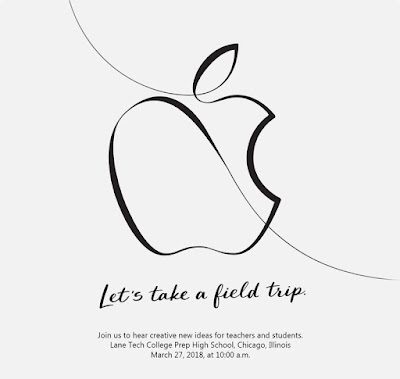 Apple has scheduled its ‘creative education’ event on March 27 in Chicago and is in the process of sending out media invites for the same. From the invite it is evident that the company will focus on education-related announcements for teachers and students.

Apple is rumoured to be introducing a new version of Apple pen along with low-cost iPad that is said to be priced around $260. The updated iPad will sport a 9.7-inches size. There are some rumours about the launch of the low cost Macbook Air, but that seems to highly unlikely.

In terms of software, Apple is also expected to formally introduce the iOS 11.3 which is currently under testing in beta. Apple recently announced that its Everyone Can Code program will be expanded in Chicago’s public schools and city colleges this spring and this could also be the reason for Apple to host an event in Chicago.